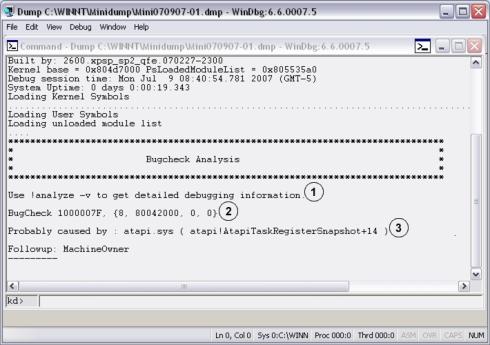 This article describes what Windows 7 Blue Screen errors are, why they occur, and how to recognize and fix them.

This article is specific to Microsoft Windows 7.
Click below to change the operating system.

What Is a Blue Screen Error?

When Windows encounters certain situations, it stops and the resulting diagnostic information is displayed in white text on a blue screen. The appearance of these errors is where the term “Blue Screen” or “Blue Screen of Death” has come from.

The error message has changed from a dense wall of information in Windows NT 4.0 to the comparatively sparse message in modern versions of Windows.

Dell provides online diagnostics that can identify problems with your computer hardware or configuration that may be causing the issue. Visit the Dell Online Diagnostics to get more information and run a scan of your computer.

These two errors have similar causes and the same , steps apply to both of them. These stop codes always occur during the startup process. When you encounter one of these stop codes, the following has happened:

This stop code indicates that the NTFS file system driver encountered a situation that it could not handle, and is almost always caused by 3 things:

These two errors indicate that a program running in the kernel encountered an unexpected condition that it could not recover from. They have identical troubleshooting and resolution steps, and you will probably need to use the Windows Debugger to find out what caused the error.

This stop code indicates that the system tried to access a nonexistent piece of memory. This is typically due to:

Use the Windows Debugger to pinpoint the exact cause of these errors.

This stop code indicates that a driver tried to access a certain area of memory when it should not have, meaning there is a flaw in the driver itself. The goal of your troubleshooting is to find that driver and either disable or replace it. Use the Windows Debugger to troubleshoot this error.
Without the debugger, you are limited to uninstalling, updating, or rolling back the driver that contains the driver file the Blue Screen mentions.

This Blue Screen error indicates that a device driver-almost always a video card driver-is stuck waiting for something (usually a hardware operation) to happen. Most of you have probably seen nv4_disp.sys associated with this Blue Screen.

Reinstalling Windows is not likely to prevent this error from reoccurring.

The Windows Debugger is one of the primary tools that are used by Microsoft software developers and support staff to analyze and resolve errors that result in memory dumps.

The Windows Debugger is a powerful tool with many useful applications, but for this article, we are only interested in its ability to analyze memory dump files that are generated by blue screen errors to determine the cause of the error.

Before you can use the tool, keep in mind the following:

Thank you for your feedback.

You May Have Missed